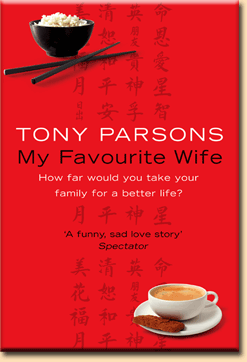 I read (or swallowed:) this book called My Favourite Wife by Tony Parsons and I am still under mixed feelings evoked by it. Feelings were many, different and sometimes even contradicting each other…

Don’t think I am naïve, or didn’t know all the below mentioned before reading the book, but the novel was so well written and strong, that it made once again strongly feel the unfairness of this world, unstably shaky environment of people’s psychology and the dirt of today’s reality.

I was extremely disappointed and sad, when I realized that even very stable and special families get “third” person in between.

I was very annoyed to realize that the “third” person was getting more love/attention/time and sacrifices, than the one, who has been close and supportive in most difficult times.

I was terribly irritated to see that the author described a banal affair in much stronger colors, presenting it to be one of the most impressive, influential and strongest experiences of man’s life, leaving the exceptionally happy marriage on the background, as something dull, too simple and normal.

I was almost sure that what that poor man did for his mistress he would not do for his wife. I wonder why though… somehow the first answer, which popped in my mind, was “because his wife was stronger”. It brought me back to the permanent debate of whether women should be strong against all odds or stay weak as initially decided by nature, in order to wake man’s instinct of acting protective…after all strong women don’t need protection, they need admiration/appreciation/devotion and 100 other things, which only strong man can provide…

On the other hand, I was happy to see that “practical women, or permanent girl-friends” – (that is how the author was calling Chinese whores) were not able to buy happiness through their youth and bodies and their well plaid act of pretending love got out of disguise.

There were many different values touched on different pages and no solution or value was given to any of them. The decisions and opinions about each of them were given to the reader.

Somehow the book leaves that feeling that all you dreamed of is just a bubble… empty space… a moment comes and all your goals become extremely senseless.

In general it’s a negative book with scarily realistic picture of the reality…so realistic that people may not want to know about it.

Talking about the reality…if you all knew how terribly strong I don’t want to go to work tomorrow!!!!!