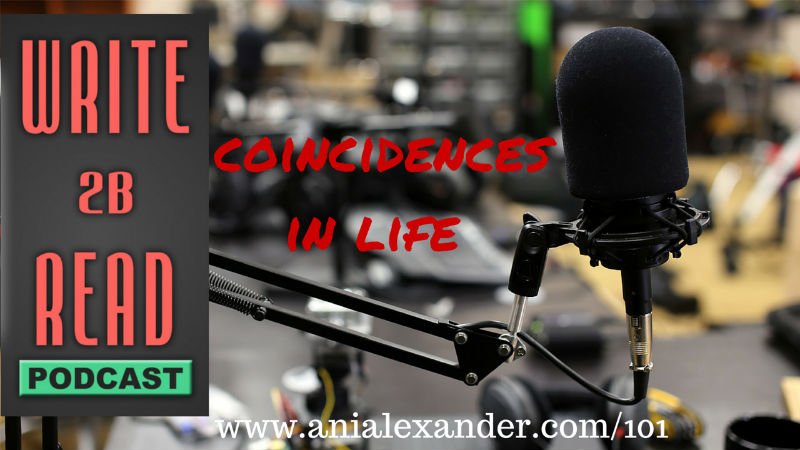 Click to Listen
0.75x
1x
1.25x
1.5x
2x
0:00
...
Apple PodcastsSpotifyTelegramShare Leave a ReviewGoogle PodcastsListen in a New WindowDownloadSoundCloudStitcherSubscribe on AndroidSubscribe via RSSSpotifyPlayer Embed
Powered by the Simple Podcast Press Player
First of all thank you so much for the amazing feedback for the episode 100. For those who have not listened to it – the write 2b read podcast episode 100 featured interview with me, which my friend podcaster Bill Nowicki had recorded just few days after the podcast was launched. So if you wanna know more about me as a person and find out who stands behind this voice and as I’ve been told pretty thick James Bond girl accent – then head over to www.anialexander.com/100

By reaching the milestone of 100 episodes I spent some time thinking about how much I have learnt in less than a year of podcasting… And it’s not like all the things I’ve learnt are related to podcasting, not at all…

So today I would like to talk about the coincidences in life… which later, looking back are things that had to happen in order to lead you to things which you had to come across.

In order to explain what exactly I mean I’ll refer to the Write 2B Read podcast – which you are listening to right now and which has become a very crucial part of my life. So let me tell you its story.

I thought about podcasting long before I actually launched this podcast. I love to talk, I love people, I am curious and I am a story teller, so it was sort of logical that podcasting could be something that I would enjoy… BUT what happens usually when we want to do something? Yup… self-doubts and excuses attack and push back the intention to do something new. And that’s exactly what happened to me back then. I recalled the fact that I have an accent and that would not sound well… I thought that the technical part of producing a podcast was very complicated and I also thought that no one would like to be interviewed by a completely unknown Armenian podcaster…

And then the coincidences in my life came by one by one. First of all one of my good online friend and a fellow writer Rob Cubbon introduced me to my current podcasting mentor Meron Bareket. I don’t even remember how did the topic come up. It was long after the self doubt had won and I had decided that podcasting is not something I could possibly manage and had forgotten about it. So I got introduced to Meron’s free video tutorials, where he covers everything you need to know about launching a podcast  (which by the way you can get too at www.podcastincubator.com/write2bread) and after watching the first few videos I realized that technically it is not as complicated as I thought.

That sort of made me think that things were not impossible. So I drank a bottle if beer and recorded a few second audio to send out to few British friends and see if my accent would be bearable. The feedback was great and they told that I should definitely go ahead and start a podcast.

So it all led me reach the point when I though “what the hell – let’s try it”. For me it was just an experimental project. I was going to do my best, try and see what happens.

Now, when I think back … I might have never known Rob (btw I still don’t remember how we met online)  and respectfully not be introduced to Meron… Even after the launch I might not have put so much time into it… or got so many amazing guests… or might have given up at the early stage…

So I guess, things happen for a reason. When they do you don’t yet know where those things will lead you to…

Yes there is an element of luck to meet the right person at the right time, to come up with an idea at a time when there are people who are willing to help you execute it, to gain the courage when you need it most…

but if you embrace what comes and later on help the chain reaction with putting some time and effort on top of the initial coincidence amazing things may happen.

When you get an idea for a book – help it become a book – start writing it and don’t let the uncertainty about whether it will sell or not stop you.

When you meet someone online – help that person change your life – talk to him. I am connecting to 3 new people online each day. Some of them later become online friends, business partners and avid listeners.

When you think about doing something you’d like to do – don’t overthink – just do it. Don’t let the imaginary barriers stop you from starting.

When you get self-doubts – try to see how real the doubts are… maybe they are created and imagined by you and have nothing to do with the reality.

They may lead you to amazing changes and make you create something amazing.

Maybe coming across the Write 2B Read podcast was not a coincidence either and the fact that you are listening to me know means something… like that you need to write that book inside you, or you need to find out how to share the book you have  already written with the world – or simply get the inspiration and the encouragement that you needed now.

Go ahead and make things happen. You can do it!