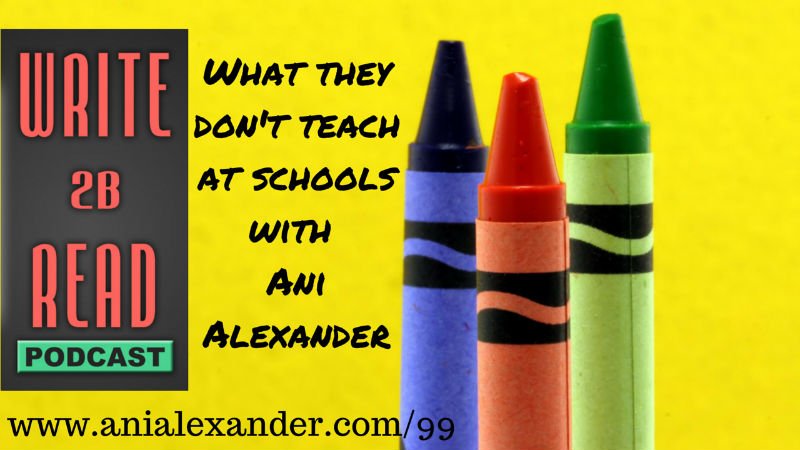 Click to Listen
0.75x
1x
1.25x
1.5x
2x
0:00
...
Apple PodcastsSpotifyTelegramShare Leave a ReviewGoogle PodcastsListen in a New WindowDownloadSoundCloudStitcherSubscribe on AndroidSubscribe via RSSSpotifyPlayer Embed
Powered by the Simple Podcast Press Player
When I was young we trusted the educational system and thought that it was enough to gian all the  knowledge one needs to have for the adult life. Maybe that’s because the educational system was much better back then… or maybe it’s because we were extremely naive… I don’t know.

Now, I start really disliking schools. I have a feeling that most of the important things are not taught there. Besides that in the times when the access to information and knowledge is  just few keystrokes away I don’t see the value schools bring so much…

So I decided to share those with you today.

I wish that instead of teaching what one should do in life and what is wrong and right they taught us to follow our dreams… Unfortunately most of us forget about our childhood dreams by the time we grow up.  But maybe that would not happen if we were told that dreams and  adult life could co-exist and that childhood dreams are not necessarily incompatible with the real life. I meet so many people, who wish they were doing something else instead, who still recall the dreams they had in the past and regret that they never even tried to make them happen.

Well you know what? All that is a bullshit! I am more than certain that we all need to dream. Always! No matter how old we are. Dreams should be part of our life and I wish someone told that to me at school, so that is why I am telling you this now. Follow your dreams so instead of regrets or dreamless life you’ll end up being excited.

The other wrong misperception we have is that if we study well we will get a guaranteed success. But that’s not true at all. Only the academic knowledge is not enough… there is so much more you need to have. You gotta have emotional intelligence, which is not taught in any school yet. You need to have a certain unique personality and no one can teach you how.

So what do we learn at school apart from the academic stuff? Well we are told the standard life scenario… we are brought up to think that the right way is to study well. to graduate and get into university. After that we have to find a job, climb the career leather, get married, buy a house, have kids….  What they don’t tell us in school is that there is a choice – and the choice is not simply studying well and being successful and rich or study poorly and be poor and unhappy as they imply.

They should teach at schools that there is always a choice and most importantly there is a choice of NOT following the crowd.

it is ok to be different.

I went to school in times when the Soviet Union still existed. Back then any kind of differentiation (not only at schools, but everywhere else) was punished. We were supposed to dress, think and behave the same way… all of us. Maybe that is why I love the fact that I can no longer hide the fact that I am different and love being that way.

I also wish that children at school were told that one does not necessarily have to work for someone else and that it’s a choice too. I believe that there are people who do not need to ever create a CV and who should start their own thing straightaway. Yes, I agree that the entrepreneurship is not for everyone… but working for a company is not or everyone either, right?

I also wish that children knew that it is ok to fail and that there is no such person, who has never failed before. Children have to be taught  not to get discouraged, not to give up, stand up straight and try again when they fail.

School tests and exams are designed in such way that they make children to use their left brain and only the left part of their brain is graded as a result. That is good, left brain is very important indeed … BUT they should know that right brain also exists and it also needs to be used.

Just like they learn the basics of math they also need to learn about their creativity and intuition.

As you can see I don’t expect too much from schools and universities. On top of what we get there, I think that the life and personal experiences are the better teachers.

« Previous Post Writing, Money and Book in a Box with @TuckerMax Next Post » Who’s That Girl? Revealing the Real Ani (episode 100!!!)