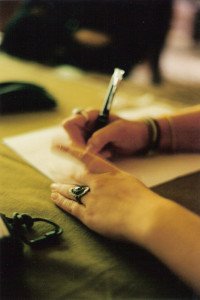 Note: I am participating in the ‘Writing Contest: You Are A Writer’ held by Positive Writer.” – See more here

I was only 16. For the 4th time already we took our suitcases and moved to a new country. Usually I was adapting quite easy but this time it was harder. I think it was because this time I did not like where we were and was intentionally refusing to adapt.

As a result I felt isolated and depressed. I am saying this because I believe that the state of writer’s soul has profound impact on what he writes.  The state of my soul made me start to write.

It was yet another ordinary day. I sat at the kitchen table and doodled. For the record, I cannot draw at all, so all I did was put lines and circles on paper in pretty chaotic manner. It looked stupid.

Then I started writing different English words on top of that mess. Now the paper looked even worse. I have no clue why English was the language that I came up with, since it was not my mother tongue and I did not know it very well back then.

I stared at the paper for a while and thought of nothing. The feeling of desperation came over me. All I could do was feel it. All it could do instead was become stronger.

So that’s how we sat together for a while – the messy paper, my desperation and me. It felt as if the kitchen was too small for all of us. Nevertheless none of us was willing to leave.

Then something strange happened. I picked back the pen, turned the paper to its blank side and wrote the English alphabet in one line all in caps ABCDEFG……

Why? I still have no clue.

Few seconds after that I wrote the first line of my very first poem. The second line followed immediately. Then the third, the forth…. I watched the alphabet above, came up with the last word of the next line and then linked it with the previous line by writing the words in between.

Now instead of the messy paper I watched at a paper with alphabet line on the top and a complete poem written below it.

The process of writing the poem was nothing like the stereotyped image I had in my head. That is of someone who wrote and erased for hours, someone who struggled for words and often tore the page and gave up. Everything was smooth, easy and fun. In fact it felt as if someone else was writing instead of me and I was simply watching over the shoulder.

I am sure that I wrote many different things before for school. But when I think back to identify my earliest writing memory, this poem comes immediately to my mind as first writing experience. This was the first time when what I wrote mattered.

Below is the poem I wrote in the small kitchen hugged by desperation, for those who are curious

The future is so unclear
And the embarrass is so real.
What will happen after this Sunday
Besides that it’ll be Monday?
I just don’t know
And there is no law
By which the life goes
Without a single pause.
Sometimes there are so many changes
And you see so much faces.
Sometimes it’s so uninteresting
Cause there’s no new thing.
Life goes, taking with him joy and pain,
Sun and rain, love and shame…
Sometimes you even think you live in vain.
Well life is a mysterious secret
The solution of which you’ll never get

I am sure that everyone has his own unique first writing experience. This was my first step in the exciting journey of becoming a writer.

What’s yours? Feel free to share it in the comments below.

5 replies to "The Day I Started Breathing Words"