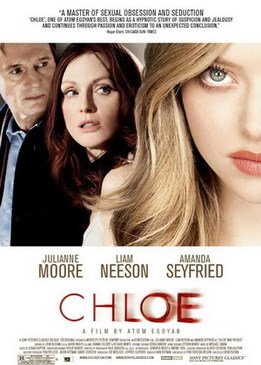 Lately, instead of reading I spend my evenings watching movies. It most probably means that I still want to fill myself with emotions and thoughts, but with less effort because I feel lazy J

One of the last viewed was Atom Egoyan’s Cloe. Nothing very positive had been said about it as far as I know and it seemed to be controversial, so no doubt I was determined to watch and have my our opinion, rather than following the crowd.

Usually I value books and films, which touch me, which I can feel and which I need some time to absorb. In that sense, Cloe was great.

If I have to choose only one and strongest emotion it radiates I would chose the loneliness. It is about 4 completely lonely souls 3 out of which are sharing the same house, but not much more.

Then the picture of vulnerability of people’s soul comes into place, when marriage starts failing, when people get misunderstood and ignored. When they are ready to do anything only to be heard and noticed, loved and valued.

Confused middle age woman with teenage son and failing marriage – what can be more dangerous than that?

The movie is not a block buster and does not have chances to become such. It has narrow target of people, who like stylish, emotionally thrilling and thought evoking stories.