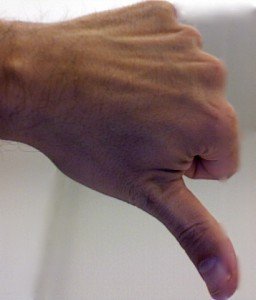 “To avoid criticism say nothing, do nothing, be nothing.” ― Aristotle

I wrote my first novel Highfall few months ago. For the first time I wrote fiction, which was longer than 3 pages. But that is not what I would like to write about today.

After finishing the novel I let it ‘’sleep’’ in my computer for months. Only very few close people were provided with the draft to read (i.e. the people, who most probably would not be able to provide objective feedback). No one else…

It was not because I did not want to share the book with others, neither it was because I thought the book was not good enough. The main reason was that I needed some time to get psychologically prepared for criticism. It took quite a while and when I thought I was ready I sent out the novel to several people, who do not know me personally and asked for their honest feedback. I still feel scared about what I will receive, but at the same time I know that it is something I cannot skip in case I want to become a real writer. So now I am both scared and excited at the same time.

How did I manage to reduce the fear of criticism and look at it with different mindset?

Well I came up with several thoughts, which helped me see criticism as something helpful and positive. I guess the below points may apply to almost anything and are not limited to authors/writers and artists.

No matter what you may think the critic is not about you – it is rather about what you have created. Do not take it personal. Take it easy.

No matter how hard you try there is absolutely no way you can see your creation with stranger’s eyes. How others will perceive what you have done is something you will not be able to know without listening to what they say. There is just no alternative way of finding out…

3. No one is perfect

There is absolutely no one out there, who has got nothing to be criticized about. No one is perfect (even the ones, who seem so).

You are like all the rest not perfect, but that does not mean that you cannot improve. Critic will pinpoint things, which need improvement. Now you will know what to concentrate on and make sure that you focus on the right things.

The more attention your work receives, the more criticism you’ll have to deal with. So don’t be upset by criticism, rather value the fact that at least someone noticed what you did.

No one said that you should accept everyone’s criticism. There are people, whose opinion may not be important to you. Some people may criticize just for the sake of it; some others may not understand what you’ve done. Decide who you will be listening to and which the points you are ready to accept are.

No one said that all critics you receive are right. In case they are not, you will have the desire to prove them wrong. And that strong desire will become your motivation to succeed.

8.  For someone to criticize you, it means that he/she cares

“He has a right to criticize, who has a heart to help.” ― Abraham Lincoln

The person could have used the time to do many other (more pleasant) things, but he/she chose to take that time and provide you with constructive criticism instead. That itself is something to appreciate.

We all need criticism from time to time and Mr. Churchill has explained best why

“Criticism may not be agreeable, but it is necessary. It fulfills the same function as pain in the human body. It calls attention to an unhealthy state of things.” ― Winston Churchill

Many people allow criticism ruin their self-confidence. There are some people, on the other hand, who are so self-confident that they refuse to accept any criticism. The key here is trying to keep the balance.

I guess what I mean is:

“The trouble with most of us is that we’d rather be ruined by praise than saved by criticism.” ― Norman Vincent Peale

And I guess the most important is how you move forward after the criticism.

Will I forget about my novel in case of negative criticism?

Will I improve it based on the feedback I receive?

Will I give up my decision to become a writer?

The answers for me are No, Yes, No…

That is my point. One has to decide the limits of how much power one is ready to give to the critic… and only then seek one.

I personally will keep going… what about you?

Would love to hear about how you deal with criticism and what do you think about the topic in general.

8 replies to "10 Reasons To Welcome Criticism"