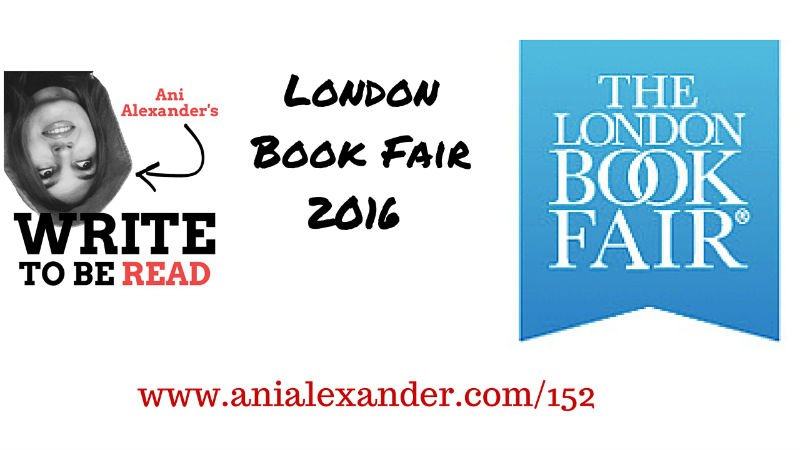 Click to Listen
0.75x
1x
1.25x
1.5x
2x
0:00
...
Apple PodcastsSpotifyTelegramShare Leave a ReviewGoogle PodcastsListen in a New WindowDownloadSoundCloudStitcherSubscribe on AndroidSubscribe via RSSSpotifyPlayer Embed
Powered by the Simple Podcast Press Player
The past few days I spent at the London Book Fair. I was there for the first time and had no idea what to expect. Overall it was a really nice experience and I finally met few people I had interviewed before, so it was super cool.

It was nice to meet in person Mark Dawson, Joanna Penn, Ricardo Fayet from Reedsy and Dan Wood from Draft2Digital.

And of course I met new people and as a result you will be having new interviews with very interesting guests coming up, so if you haven’t done so already please make sure you subscribe to my podcast on iTunes or Stitcher not to miss any of the upcoming cool content.

I wanted to make today’s episode about the London Book Fair and share my impressions, observations and takeaways from the time spent there.

So this will be a bunch of different thoughts in not so structured format, but hopefully you’ll like it nevertheless.

What is the London book Fair?

The London Book Fair this year celebrated its 45th anniversary. It is the world’s leading publishing event: the global marketplace for rights negotiation and the sale and distribution of content across print, audio, TV, film and digital channels. It had 25,000 publishing professionals from over 124 countries.

The London Book Fair was held at Olympia, which was built at 1886. The stunning buildings have unique atmospheres and create unforgettable settings for events, exhibitions and conferences.

The place was huge – so huge that you may get overwhelmed and have no clue where to go. I even lost the cloak room at the end of the day and I was risking going back home without my coat. It took me about 25 minutes to finally find the place and get it. The funny thing – well it was a minute away from the place I started the search.

Anyway I think you’ll be more interested in self-publishing than in my coat.

So on the fair I realized how self publishing was perceived in the industry. As I said that place was huge, but vast majority of exhibitors were from the traditional publishing industry.

So all self-publishing related boots (when I say all I mean only 3 – Amazon, Kobo and Draft2Digital) were put in the furthest possible corner – at the very end of the floor – completely isolated from the main hall. That fact itself illustrated that self publishing was still not considered as serious player in the publishing industry and is completely ignored by the traditional publishers.

In fact the whole place was centered on printed books and the digital solutions were not highlighted at all. Besides that by walking through few boots and asking few questions I realized that the traditional publishers have been ignoring the existence of the self publishing solutions so much that they did not even have basic knowledge about those.

But I’d love to see what will be the situation at the same London Book Fair in 5 or 10 years.

Being a book lover it was amazing seeing so many different books at one place. Colorful, different shapes and genres, good quality books everywhere.

You can only imagine how disappointed I was to find out that all those books were only there to be looked at… oh and you could touch them too of course. But no one was giving away any books and you could not buy any one of them.

Amazon had a space within that far away self-publishing corner I mentioned, where it had its Author Headquarter. There it organized different panels and discussions, where Amazon’s successful independent authors were featured.

The authors staid after their session to interact with the audience and answer their questions. That place was very dynamic and always full. People were even sitting on the floor because there was not enough space. That made a big contrast compared to the half-empty and boring boots in the main hall.

Even the people were different at the Author Headquarter. The dress code was more casual, there were indie writers with beards, tattoos and crazy shoes. The atmosphere was not official and people were relaxed.

This whole difference was very similar to corporate life and entrepreneurship. The “normal” people who thought they were more legit and reputable in the main hall and more prestigious space and the cool people who were more fun, independent and creative.

I think you can guess where I spent most of the time at the fair, right?

Impression Number 4 – Writing is part of the author

When I spoke to the authors and listened to their sessions it became obvious that writing was integrated part of their life and their personality. It was their passion, it was their lifestyle, it was their business and part of who they are. They had the writing in their daily routine. You could not imagine those people not writing or not reading. They were trapped in what they had chosen… in a good way, of course.

When I was listening to the successful independent writers such as Joanna Penn, Mark Dawson and Rachel Abbott I found one similarity there. All three of them had corporate pasts and used their business mindset in marketing their books and putting their author brands out there.

None of them wrote and waited to be discovered. All of them treated writing and their books as business, all of them made a plan and worked hard to make things happen.

As opposed to many fiction writers who consider their writing being art and shy away from marketing the successful authors balanced well their creative processes and the promotional efforts.

Impression Number 6 – Don’t Give Up

Rachel Abbot has sold over 2mln books already. And she is completely independent self-published from the very start. Guess what was her initial target? One thousand copies.

Mark Dawson confessed that when he put his first book on Amazon in the first month he sold 1 or 2 copies only. And this is the same person, who made almost half a million dollars last year from his book sales.

What did they do besides creating the business plan I mentioned before? Well, they did not give up. I am sure the road was not very smooth and they must have felt like giving up at least once… but they haven’t. And that made all the difference… (wow the last part sounded like Robert Frost poem The Road Less Travelled)