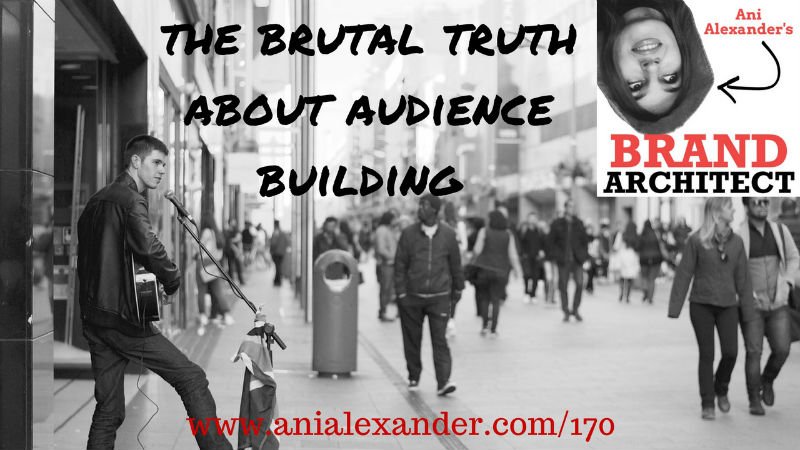 Click to Listen
0.75x
1x
1.25x
1.5x
2x
0:00
...
Apple PodcastsSpotifyTelegramShare Leave a ReviewGoogle PodcastsListen in a New WindowDownloadSoundCloudStitcherSubscribe on AndroidSubscribe via RSSSpotifyPlayer Embed
Powered by the Simple Podcast Press Player
Today I want to talk to you about something that you may not like to hear. Many people prefer not to tell you this. Many people prefer to pretend this is not the case. But I need to tell you this anyway. So you are able to look at things realistically. So you avoid being disappointed because you had unrealistic expectations.

Here is the truth

Building an engaged and loyal audience takes time and loads of content creation.

Of course all those who advertise the attractive “have quick results” model pretend that it’s not the case. You get “write a book in a day”, create an online course in a week, grow your brand in a month type of messages all the time. And of course that’s much more exciting than what I said. It sounds so much better than my “it takes time and work and you have to be persistent and patient” story.

I get that. I totally understand. But nevertheless, I prefer to tell you the bitter truth than the sugar coated lie.

I was walking in the city the other day and went to Covent Garden. Usually there are many different street performances out there – from music to magic tricks and stuff. And since I love watching people I took some time and stuck around for a while. So I ended up seeing how one of the performers, who had the largest crowd gathered around him finished for the day. He said good bye, gathered his last portion of applauses, bowed, packed his stuff and left. Obviously the crowd too, melted out and after few minutes there was no one around.

Few minutes later, a slim guy with long hair came and started setting up his mic and took out his guitar. Now it was his turn to start performing. So there was this guy all alone with his guitar and mic standing there. I realized that probably that’s exactly how we look when we are just starting. We have no audience, we have the tools, we have not created anything yet and we get those uncomfortable fear of failure, self doubt and vulnerability of being judged. And the people – un our case the audience, pass by going to watch someone else performing because he already has a big crowd gathered around him therefore he must be good, right?

So what happens next. Yup… the guy starts playing his guitar and singing his song. Did everyone run and gathered around him immediately? Nope… It took quite a while.
For at least 2 full songs the guy was standing there, singing to no one. All by himself, creating his magic. He was not noticed yet, he did not have anyone to perform for yet… but he kept playing.

That’s what happens to us too… we write blog posts, record podcast episodes, do videos, lifestream… and for weeks nothing happens. We feel like we are talking to ourselves. We feel invisible, unknown, unappreciated. At some point we are like “why the hell am I doing this, no one cares anyway”, right?

So what happened to the guy?

Well after a while few people came and stood to listen, then some more… after the songs they started clapping, few others paid attention and joined. After a while he got traction and gathered a pretty decent audience.

Do you see the parallel?
The guy showed up, took the courage to put himself out there, created his music, persisted even though no one paid attention for a while, kept going on and only after all that things started moving.

What would have happened if he gave up after song 1.

It’s the same with us. We have to realize that there are others who do similar things out there already, that no one is going to notice us from day 1, that we need to create awesome content consistently until people start gathering around us and that we need to stick around and do our best not to give up even when we think no one care…

No one will care in the beginning.
Tweet This

But that’s ok. That’s how things are. Even the person who eventually fell in love with you did not care about you at your first encounter.

So don’t get distracted with all the shiny objects that promise you many subscribers, readers and listeners in a week.

Think long term and think quality instead.
Tweet This

As I said building an engaged and loyal audience takes time and loads of content production.

So accept that fact and do your best.