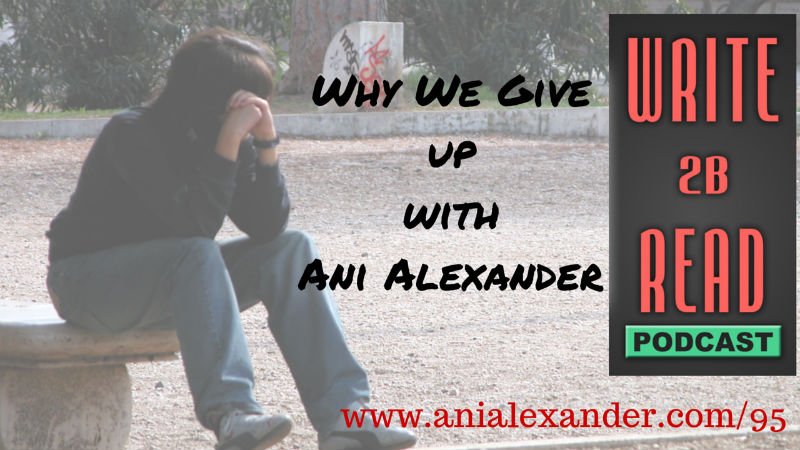 Click to Listen
0.75x
1x
1.25x
1.5x
2x
0:00
...
Apple PodcastsSpotifyTelegramShare Leave a ReviewGoogle PodcastsListen in a New WindowDownloadSoundCloudStitcherSubscribe on AndroidSubscribe via RSSSpotifyPlayer Embed
Powered by the Simple Podcast Press Player
We all have given up at some point. All of us at a certain point have stopped believing that we’ll be able to make it. Some of us have done it often, some just very few times, but all of us know how it feels.

The  sad fact is that most of us give up far too soon.

I was thinking the other day – why do we actually give up? What are the most common reasons and are there any ways to get around those?

Let’s get to the first reason – discouragement. No matter what you have decided to do, as soon as you share it with people there will be at least few who will tell you that YOU Can’t Do it and come up with different reasons about why it can’t be done. At that point you may decide to give up the idea even before giving it a try.  Instead of thinking about giving up think about how are you going to prove all those people wrong. Get inspired by the biographies of Michael Jordan, Steve Jobs and Ray Charles and all others who proved that discouraging words have no power.

In fact proving those who doubt me wrong has been pretty good motivation for me so far!

The second reason why people give up is lack of self-confidence. If you don’t believe in yourself you will always be tempted to give up because you won’t believe in your success. The self-doubt will be keeping you from pushing forward.

I was there too.

I somehow thought that I was not strong enough to make my dreams come true… but then there was a shift in mindset which sort of set me free. And it was one simple realization. The realization that none of the people who have succeeded are better than me. They worked harder, they were persistent and they believed in their dreams – but they were not better… and you are as good as them.

The third reason for giving up may be the lack of focus. These days there are so many distractions… Social media, TV series, and different smart phone notifications not letting you focus on the important things. If you don’t keep focus on your goal you will end up with insufficient results and that will discourage you.

That reminds me of yet another reason. We give up when we don’t see immediate results. We all want things to happen fast and it is hard to realize that it takes time. There is no such thing as overnight success so we have to keep in mind that it takes time and be prepared not to give up at least for that certain period of time.

The other reason you give up may be that you lack motivation, enthusiasm and inspiration.

When I am starting something new I am on fire. I am full of enthusiasm and I am motivated. But with the time things may start cooling off and at some point the self-motivation may not be enough to keep me moving. That is when I may think about giving up… that is when I need to go back to beginning and try to recall the big why. Why did I start that project on first place and what was initially motivating me? that brings me back on track most of the time/

People also give up because they miss their comfort zone. No matter what kind of life you had – you were used to it and that brought comfort. Now when you have initiated changes you entered the stage of uncertainty and struggle, which by no means is comfortable. What makes me not giving up in those cases is the thought that once I get where I wanna be my new comfort zone will be a much better one.

We also often give up because we initially thought that things would be easier. But then I’d say that anything worth achieving is hard. Yes the easiest option is to just give up… but then, will it be easy living with the regret that you gave up midway?

On the other hand I would not say that giving up is something terrible and wrong. Sometimes you may end up having too many things on your plate and that may make you overwhelmed. Sometimes you may need to give up certain things because they may not be a priority at that point.

Get a free audiobook from 150,000 available fiction and non-fiction titles for your iPhone, Android, Kindle or mp3 player here.